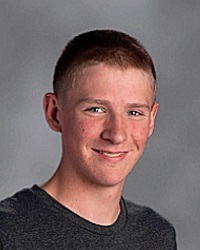 Trystan Weir, son of Sean and Brenda Weir of Waynesburg, is Clarksville Lions Club February Student of the Month.

Trystan is a firefighter/EMT of Jefferson VFC and is a member of the Hunting Hills Hawkeyes.

In the fall, Trystan intends to join the Airforce for Fire Protection.  After his service, he would like to study nursing and ultimately become a flight nurse with LifeFlight.