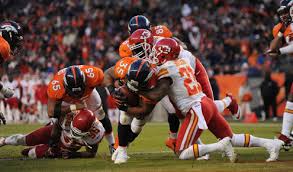 The Kansas City Chiefs ended their two game losing streak and put a grip on the AFC West with a 29-19 victory over the Denver Broncos. They traveled to Invesco Field in Denver on October 30th

Kansas City is now 6-2 and ahead the Broncos after defeating the Broncos Monday night. Kansas has had a tough time with their offense in the first half, but tight end Travis Kelce came in clutch with seven catches for 133 yards and a touchdown. This was enough support for the Chief’s defense to force Denver to throw five turnovers and they never gave up the lead. Not only did the Kansas City defense score, they dominated in the fourth quarter. Denver was down by seven heading into the final 15 minutes after trailing by double digits for most of the game.

Kenneth Acker’s fourth quarter pick was one of the three that Siemian threw during the last few minutes in the third quarter. A number that looked not so good next to his 198 passing yards, with only completing his 19 out of his 36 pass attempts. Even with a strong defensive run they were able to stop Denver’s passing game on Sunday November, 5 the Dallas Cowboys will travel to Kansas City for this epic match up. They’re both 6-1, so this should be a good game. Everyone is expecting Kansas to win because their offense has been pretty solid so far this season and good defensive haven’t been able to stop their offense.