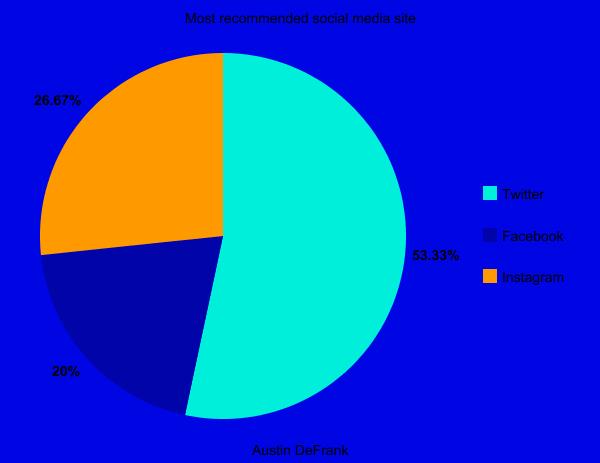 Most students prefer Twitter as their social media source. Jacob Van Divner  was asked why he prefers twitter the most and he replied with “twitter keeps me updated with my friends and it also keeps me entertained when I’m bored. There are many funny accounts on Twitter that will make me laugh when I need to. Twitter is also a good way to keep up with friends.”

The survey also asked student if their favorite source of social media is inappropriate for younger kids. 13 out of 15 students said that they are inappropriate for younger kids. Aaron Mylan was asked this and he said, “Yeah, there are a lot of bad things that are posted on social media. There is an age restriction for these sites but I think the age restriction should be raised. There are a lot of bad pictures and words that most kids shouldn’t see.”

15 students were asked on the survey what source of social media can affect reputation the most, 9 out of 15 students said it is Facebook. Aaron Mylan’s response to this question is “I think Facebook makes the biggest effect on reputation for people. You can be tagged in embarrassing pictures that everyone can see. It also shows everything you are tagged in and most things aren’t something you’d want others to see.”